REVIEW: "Brides of the Mansion"

It is once more advised to click to enlarge and enjoy this picture in all of its details.


Now, this is probably more an illustration than a strip, but (contrary to some other illustrations by Kelly) it is still undeniably part of the series.

Now, though the facial expressions (which are really great !) in this strip can amuse anyone, some historical insight about the Haunted Mansion attraction(s) might be required to get what this picture is all about. So let's analyze it for you, since analyzing and reviewing is what this blog is for.

As you probably know, an important part of the Haunted Mansion ride is the Attic, where you meet the foreboding ghost of a lonely bride. The two main character models are the Beating Heart Bride, who is characterized by a red glow in her chest where her heart would be, which beats back and forth, with the noise filling the attic. This design existed from the Mansion's opening to 2006, and was dubbed "Emily". The second one is the Black Widow Bride, who wields an axed and is implied to have brutally killed her groom(s), and has been officially (and cleverly) dubbed Constance Hatchaway; she replaced the former bride in 2006. However, before Beating Heart was replaced with the Black Widow, she had gone through many redesigns, and several completely different animatronics had been created. This picture is the imaginary scene of all the versions of the Bride characters having tea together. Which is hilarious. 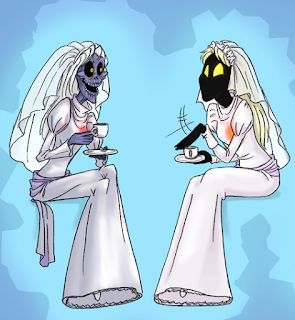 The two Brides here are the first and second versions, respectively nicknamed Skeletor and Round Eyes. As the two oldest ones in the bunch, it'd make sense that they would preferentially chat with each other, reminiscing about the "good old times" and such. I especially love Skeletor's expression (she looks like an old, but cunning and slightly zany lady from a good comedy film). 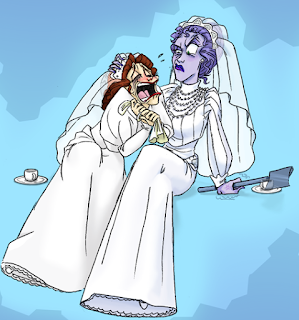 The purple one is Constance Hatchaway (notice the hatchet), the Black Widow Bride who murdered five husbands in a row. The one with the brown hair is Mélanie Ravenswood, who is not from a previous version of the Haunted Mansion, but from its Disneyland Paris counterpart Phantom Manor. As you may or may not know, Phantom Manor takes a lot of set pieces and ideas from the Haunted Mansion, but plays it all for drama, and the whole attraction is themed around the oh so tragic story of the poor bride Mélanie, persecuted by the evil Phantom (who may or may not be her own father Henry Ravenswood's ghost) who killed her groom unbeknownst to her. Though Phantom Manor is pretty good, it is a little bit too melodramatic if you're expecting something as light-hearted as the California and Florida Haunted Mansions. Hence why this is affectionately parodied here with Mélanie being in tears (about her own story, probably).

Why is coupling her with Constance a good idea ? Well, it must be noted that fan ravings about "Emily" and various urban legends notwithstanding, none of the other Brides (the Beating Heart ones) have a defined backstory or morality. You don't know if they were tragically abandoned by their groom, or if they murdered him. Some will tell you it adds to the effect, others that it's lazy, but whatever the case may be, Mélanie and Constance are both derived from the original morally-ambiguous Beating Heart Bride, but stretched in opposite directions. As Kelly herself puts it, they are "on the opposite ends of the Bride spectrum". 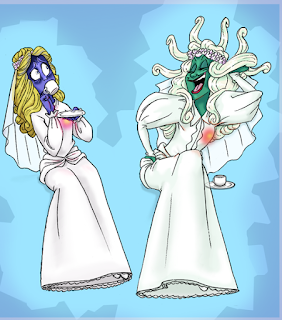 Those are the two least remembered and least beloved models of brides. The one on the left, the “Smurf Bride”, is disliked for being two openly a victim (compared to the ambiguous Round Eyes who preceded her), and, well, for having (for some reason) blue skin. The one on the right is the “Crazy Hairdo Bride”, who is nicknamed like that because huh… well you can see for yourself. Nobody knows why the Imagineers redesigned the Smurf Bride's hair that way, but everybody found it ridiculous and awkward (hence the Smurf Bride's reaction to it).

So, there is Brides of the Mansion. The art is increasingly hilarious, and it was nice to see some color before we went back to the black-and-white.

A little while later, Kelly did this, which is a model sheet of sorts for four versions of the Bride (including a cameo by the Tokyo Disneyland Bride, who is yet another character who is not in this one, but whatever). I will not review it further since it is not a comic strip at all and is actually nothing but pencil sketches, but the expressions there are quite as excellent as on this one, and very varied, too. Check it out !