REVIEW: "Meanwhile, in the Attic" 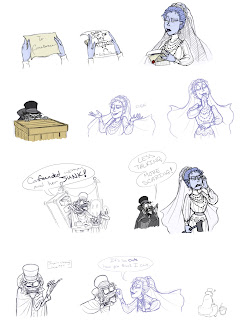 Page 1
It is recommended to open it in
another folder, so as to enlarge
it and thus be able to read it. 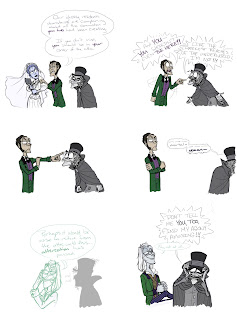 Page 2
It is also recommended to open it in
another folder too, so as to enlarge it,
and thus be able to read it, too.

Meanwhile in the Attic actually started as just a bunch of sketches of the Hatbox Ghost and Constance in the attic -- but then Kelly found out she was beginning to develop a narrative unbeknownst to herself, and rolled with it. The story's original form was more of a sketch dump from which you can make the story out, but you have to pretty much guess in what order the panels are supposed to be, and you've got to ignore a few sketches that don't have much to do with the plot and are just… there, though, being Kelly art on the Hatbox Ghost, they are still rather enjoyable to look at. Not feeling like  being mean to you, I rearranged the panels that do belong together as the story into  more traditional comic pages, which you can see above. With this intro out of the way, on to the story.

This gag runs on the same idea as the previous Never think out loud!: the Hatbox Ghost is back, and he isn't pleased with what he sees. His reaction to Constance in Think out was mostly of surprise, but now that Constance tossed him out with her bare hands, his spite has turned into hatred. Hatred of Constance. Hatred of her @#$€& changes to his attic. Hatred of all she represents: the changes made to the Haunted Mansion since the Hatbox Ghost last saw it. It is very effective, and very funny to watch; the Hatbox Ghost's grumpiness and exasperation is hilarious in the left panel.

As for the second one, it's a clever play on the fact that, while the other brides before Constance (see this review if you don't remember/don't know what I'm talking about) were silent, Constance talks the entire time you see her. 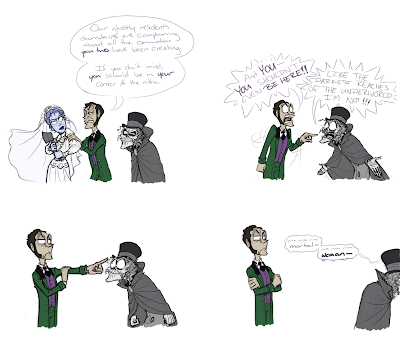 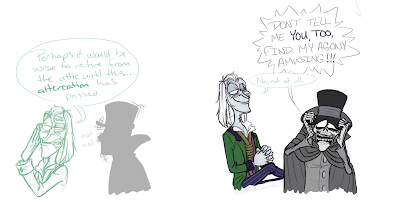 More Ghost Host !… Yippee !… It does show here, however, that the story was not as organized as I repasted it to look like. Those panels hardly flow into each other. Somehow I think that the other way around would be slightly better, but even there… Bah. Just delight at each panel individually. You can't not love the Hatbox Ghost's and Ghost Host's expressions in Panel Two.

So there… It's pretty messy, but it's still a gem. Bravo. (Boy, I love this Hatbox Ghost).