A little communication
to tell you to open this in
a new folder to enlarge it
and thus be able to
read it.


Here ! It's the third strip related to the Haunted Mansion Holidays (you will remember that the previous ones were "It's that time of the year again…" and "Holiday Spirit"), and once more Kelly delights in showing the Hitchhiking Ghosts as stand-ins for the Haunted Mansion fans's reactions to the HMH. 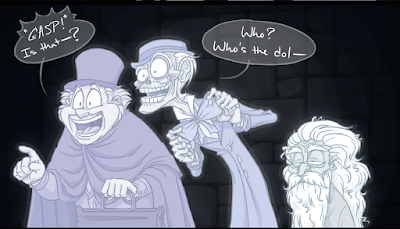 Phineas, the plump, suitcase-bearing one, is included as the "Nightmare Before Christmas fanboy" who is delighted to have a chance to meet his heroes in the attraction. His youthful glee is pretty funny to look at.

Ezra is not really a "fan" reaction, though you could make a point that he might represent the fans who think that the overlay is pretty in itself even though they don't know much about The Nightmare Before Christmas. He is more in-character with an idea Kelly had about him even though she didn't really develop it in the comics themselves, which was that Ezra would be a vain womanizer.

Gus is just the blasé Haunted Mansion fan who doesn't care in the slightest and just waits 'til the overlay is over.

About the colorization, you will notice that even though it's not as marked as it was back then, Kelly stuck to the color schemes she introduced in "It's that time of the year again…": greenish for Gus, bluish for Ezra, purplish for Phineas. It's a nice and welcome touch.

Oh, and of course, the facial expressions are very good, as usual, especially on Phineas and Ezra. This strip is good, like most of Kelly's. Makes me sad that we're getting close to the end of the series…
Posted by Achille Talon at 05:52