REVIEW: "Here there be ghosts"

It is advised to click and enlarge this picture to enjoy the strip in all its details.

Now, Kelly had done some Haunted Mansion fan art before this, but not comics; it is with this strip that the series really began.

It features the Organist, a minor character from the attraction who however got a pretty beautiful page to himself in the 1969 illustrated book by Colin Campbell, The Story and Song from the Haunted Mansion: 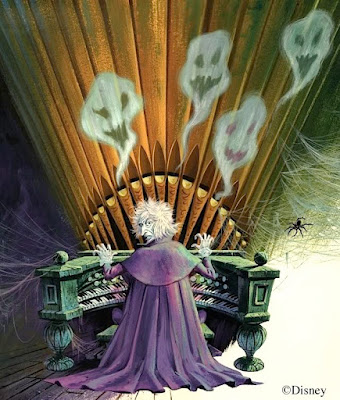 Although he is visually interesting, the canonical Organist doesn't have much about him — he's more of a device to explain that the organ is being played, than a character with a specific point. The scene's real interest lies in the weird ghost heads that float from the pipes as the Organist plays. 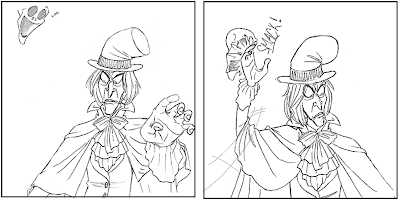 But Kelly had this idea of making him into this egotistical self-proclaimed "musical genius", which this strip is meant to convey more than it conveys the basic gag itself (which is pretty weak, actually, mainly because the pacing could be way better). His overly serious, stern facial expressions in panels 2 and 3 here are great. 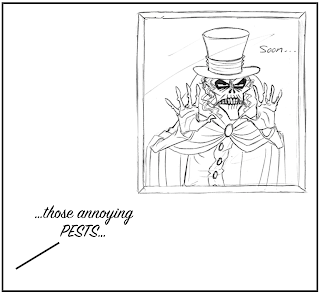 Don't strain your mind trying to figure out what the Hatbox Ghost in the background has to do with the present gag: the answer is nothing. He is there as foreshadowing that a big amount of future gags will be devoted to him. It could have been fit better into the gag, but I'll forgive Kelly here because 1° it was her very first strip, and 2° her rendition of the Hatbox Ghost is excellent. (For the neophytes who don't know why "Hattie" is outside or why he's saying "soon", all the answers will be delivered in due times when we get to the strips this is foreshadowing)

Another downside to this first strip is, as you probably noticed, it doesn't have a colorization. There was a couple of more black-and-white strips before she fortunately switched to colors.

So, here is Here there be ghosts. It's not great, but the great facial expressions still make it stand out, and it's a promising debut for this series.