REVIEW: "Not the reaction he wanted"

The reaction I'd like you
to have would be to open it
in a new folder
to enlarge it.


I have two good news, and a bad one. The bad new is, this is pretty much the last strip in the series. I have a little more stuff to review from Kelly, but it's the last bona fide comic strip. The good news are: first, the Hatbox Ghost is back at the Haunted Mansion, not only in this comic, but in real life; and second, this last strip is awesome. 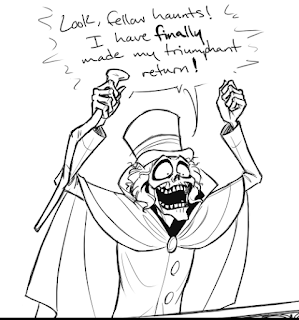 Yes, thanks for spelling that out, Hattie. As you will notice, Kelly's style changed a little in between Meanwhile in the Attic and this; here he is drawn more anatomically accurately, less cartoonishly, than it used to be. To me it's neither an improvement or a letdown; both styles are awesome, and Kelly makes the best of both. The Hatbox Ghost's hopeful expression is delightful. (I wonder how many dozen times I've mentioned how the facial expressions are awesome since I started reviewing those Haunted Mansion comic strips.)

Nice “animation” effect. You know, I'm kind of disappointed that for a last strip, Kelly didn't do a full color one, but at least the greyish effects on the Hatbox Ghost and so on show that she was caring. And, anatomically correct or not, Hattie still manages to make hilarious faces at us when he's disappointed.

The dialogues do make allusions to real Haunted Mansion facts. As the the Hatbox Ghost's “mythos” grew in those last years thanks to the Internet, Disney began to acknowledge him and use him in merchandise… yes, including shirts and T-shirts. And the “silly pictures in the corridors” refer to the Family Portraits in the Corridor of Doors, where no less than three pictures of Hattie (one wearing a crown, one a bowler hat, and one his usual top hat) can be seen.

So yes, that is the last gag. It's good. It's very good. But why did it have to stop there ?… Well, at any rate, one final bravo.