Enjoying this in all its wonderful details
might take to drag it into a new folder in
order to enlarge it.


I wasn't sure I'd do this one, since it falls more on the illustration than the strip side, but then I figured that 1° it was something of a follow-up to "It's that time of the year again", which I did review, and 2° I had something to say about it anyway, beyond “Oooh, the art is nice!”.

So, like "Time of the year", Holiday Spirit is a take on the Haunted Mansion Holiday seasonal overlay, which we can read about in the review of "Time of the year", but a much more cheerful, optimistic one, which makes me wonder — in the end, does Kelly like it or not ? Well, anyway.

Yippee! The Ghost Host again! Though, Kelly-art-lover though I may be, I'll admit that his face is not as masterfully rendered as it sometimes is. I think the pose and colouring job quite make up for it, though.

Now, the Ghost Host is pretty much the anthropomorphized version of the Haunted Mansion itself, with some misinformed fans (who are not aware of the official "Hatchet Man" look which Kelly based her Ghost Host one) even imagining that the disembodied voice is coming from the very walls of the building. So, if the Haunted Mansion gets a Christmas overlay… of course the Ghost Host would get a Christmas suit! And a nice one at that.

And fellows, just look at the details. (if you prefer to try and find those funny background details yourself, do not read further before trying yourself). 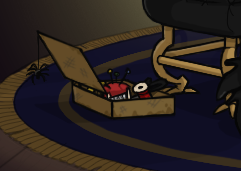 It's a sewing box! So apparently, Sally (Note to those who haven't seen The Nightmare Before Christmas: Sally is the Frankensteint's-Monster-like bride of Jack Skellington) just sewed the suit for the Ghost Host. Yeah, you may have already noticed that.

But have you noticed the spider hanging from the box ? Ah-ha ! I think you didn't. But okay, let's assume you had. We can do better than that.

Did you think that was a regular tie ? Nah! It's the Ghost Host's noose, only it has been repainted to look like a tie. What, you saw that one yourself too ? Alright, but only the most sharp-eyed sharpies will have noticed that:

…that's right. At first the pattern on the Ghost Host's Christmas suit seem like regular abstract patterns. But no: they're little skulls!

Assuming that there is one hidden by the Ghost Host's right leg, and two by his left leg, which seems likely, that'd mean that there would be thirteen of them. Ooh boy.

We Disney fans know Don Rosa as the Master of the Little Hilarious Details, but even though she's unofficial, Kelly does work on the same level of small hilariousnesses! And added to the clever idea behind this cartoon, this makes it a very enjoyable piece of work. Well done again!
Posted by Achille Talon at 12:32