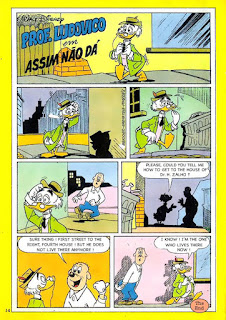 Open in another folder
to enlarge.

An obscure Brazilian Ludwig Von Drake one-pager ! How more obscure can you get ? Well, anyway.

Have I mentioned yet that I am a huge fan of Professor Ludwig Von Drake yet ? Yes I have, but I'll say it again. He is delightful. However, I always felt he was more suited for cartoons than for comics, since his fast-talking voice and his constantly-moving animation are a big part of the character's appeal. Never the less, the step of turning him into a comic character was taken by Taliaferro, and there he stayed.

The gag I selected for you today was first published n 1981; its original name is Assim nāo dá, which I have no idea what it means, sadly. Its author is Verci de Mello, a pretty prolific Brazilian artist, if I.N.D.U.C.K.S. is to be believed. 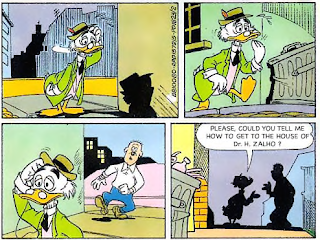 In those first three panels, there is no dialogue at all, which I dunno, but it does kinda negates the point of having Ludwig Von Drake as your character. And when he does talk, it is neither with his trademark accent, fast-talkingness or kookiness. The only piece of characterization that this one-pager uses on Ludwig is that he is absent-minded. And that he is not in a particularly Ludwig-Von-Draky way.

However, I do appreciate De Mello's art on those panels; Ludwig's facial expressions and poses are genuinely funny. There are also bits of shading in those panels, especially the first one, which I really like. What I don't appreciate, though, is…

…this guy. Have you ever seen anything more generic for a bystander in the street ? Bah. Usually, when the Ducks talk to a bystander, minor though he may be, the artist at least makes a little effort to give them a remotely interesting design. Well, the good artists usually do, that is. But De Mello seems like a good artist ! I'm not asking much, really. Just five him a moustache, or a bowler hat, or glasses, or red hair, or something that doesn't scream “I don't have time to draw this properly so let's just throw in a blank character traced from one of my old backgrounds”. 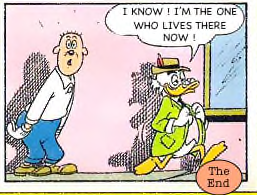 If nothing else, the punchline gives us a clue as to where Ludwig Von Drake lives. Talking of which… nah, I'll do another post about it. On another note, I like the look of the stunned Generic Bystander, although I wish it had been applied on a more interesting character design.

And yes, I do realize that I'm looking far deeper into this story than anyone on the planet, authors included, ever did. It was probably just a cheap one-pager ordered to fill a blank in an issue. But it's just my nature to review and nitpick about stuff.