Click to enlarge and enjoy in all
its glorious details.


This strip is pretty much the reason why "Brides of the Mansion" has to be taken as part of the series; it is a development of the idea of the Mélanie/Constance pairing we saw last time. 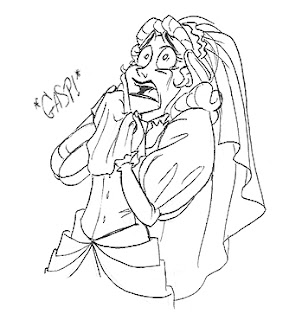 The idea, like in Brides of the Mansion, is that Mélanie Ravenswood finds her own tragic backstory absolutely dramatic and cries about it herself. The whole thing is pretty narcissistic, especially when it drives her to visit her own ride to enjoy all the whiny details of her own story. It's really a good idea for a parody of Phantom Manor, and a very original one. Meanwhile, Constance Hatchaway, the insane Black Widow Bride (who is really very scary in the real Haunted Mansion ride, which is the reason why she is considered an unwelcome addition to it), is depicted as a black-humor-loving wacko, which is a very good idea too. 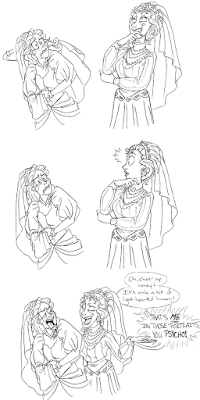 Also, something I find interesting about this strip (and it would pop up in later ones, too) is how it looks like it was animated. These three panels, if read quickly, almost seem to be moving. Kelly could have been an animator, I think. It would also be very well suited to a "comic fandub" like those that have begun to pop up on YouTube.

And this is Impending Doom is Funny, which is, obviously, very good (something I did not even bother to mention since it is the norm with Kelly comics is that the facial expressions are great).
Posted by Achille Talon at 04:16