“Please”, open this in a
new folder to enjoy it in all
its details.


“Once upon a time, there was an attraction named the Haunted Mansion in Disneyland. Every year, thousands of people visited the house, and gazed at the ghosts and their portraits, wondering how they had come to be ghosts in the first place. But no one knew for sure who was who.”

Thus began the trend of fan-made backstories and names for the Haunted Mansion spooks. A very popular one is that "Master Dorian Gracey", the young dandy whose portrait decays before your very eyes into that of a skeleton, was actually once the master of the House. This was supported by the fact that his formal portrait was hanging on its own in the entrance, apart from all the other paintings. And there was also the fact that he had Master in his name — although this is actually a mistake, as "Master" was actually what a young nobleman who was precisely not yet the master of the house he lived in would be called in the 19th century.

But then, why wasn't it he who was giving the tours, instead of the Ghost Host ? Well, head canons quickly got mad from that point onward. There actually five characters in the equation. 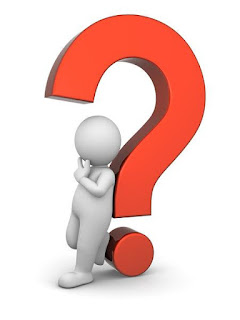 The Ghost Host:
The disembodied voice you hear narrating your tour
whenever you visit the Haunted Mansion. In a rejected
version of the narration, he introduced himself as
“The Ghost Host, Lord and Master of the House”,
but whether this is still canonical or not  in
the finished ride is up to debate. 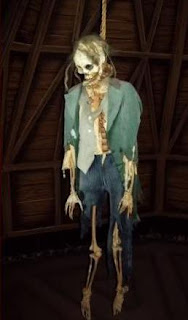 The Hatchet Man:
This character appears in various
portraits that usually hung in the
Corridor of Doors. His basic structure
is always the same, but details
(such as his skin, which can
either be blue as above, or
of a natural colour; the colours
of his clothes; whether or not his
shadow is brandishing the hatchet in
a menacing manner; and whether
he looks like an evil maniac like here,
or just a little ominous) change
a LOT from one version
to another. 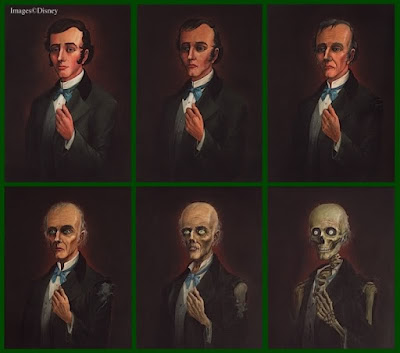 The Foyer Changing Portrait Guy:
Basically, the Haunted Mansion's
take on Dorian Gray. But whether
he's really supposed to be Dorian Gray
is unclassified. His portrait hangs
in the entrance, leading
some people to think it is
the Master of the House. 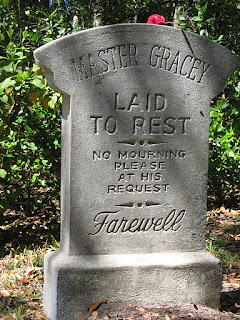 Master Gracey:
Named after Disney Imagineer Yale Gracey,
Master Gracey's name appears on a tombstone
in the Family Plot in front of the Mansion.

The way it was intended, the Hanging Man and the Hatchet Man are the same character, seeing how their suit and appearance are strikingly similar. The Hatchet Man has even still got a noose around his neck ! And the Hatchet Man is known from written treatments to have always been intended to be what the Ghost Host looked like when he was alive. And the Ghost Host seems to have been intended to be the Master of the House, judging from the cut dialogue. So the official equation is:

Meanwhile, Master Gracey and the Foyer Guy don't have anything to do with anything.

Lots of fans remained unaware of the Hatchet Man until the Internet. What they did know was this truncated version:

Now, some fans saw the portrait of the Foyer Guy who seems like a predominant character, probably the Master of the House. They developed the idea that:

Foyer Guy = Master of the House

Their idea from that point onward was:

Then they cooked up more stories about how Master Gracey had come to hang himself and whatnot, usually revolving around a tragic love story with the Bride in the attic.

The Haunted Mansion spin-off movie borrowed various ideas from the fanon, and its equation was:

Their Edward Gracey having had, obviously, a tragic love story with the Bride, Elizabeth, interrupted when the evil Ramble = Butler = Ghost Host murdered her.

Either merchandise designers are also fan-theorists, or they want to sell stuff to fan-theorists, because the Ghost Host/Foyer Guy/Master Gracey connection was used in several merchandise items. The real Imagineers who knew the real stories kept fighting the merchandise guys who used the fanon story, resulting in various items being taken back from shops by the Imagineers, only to be put back there by the Merchandisers, etc.

Where does Kelly come in ?

So, nowadays, the real story has surfaced and everyone pretty much accepted that Ghost Host = Hatchet Man. However, old habits are hard to change and they just won't give up that Foyer Guy = Master Gracey and that this Foyer Master Gracey must still be someone important. So the new trend is that Master Gracey was either the Hatchet Man's brother or nephew.

Kelly seems to use this idea, though it's not quite clear. But my point with telling you this long story  about fan theories was that it's pretty much where the point of Kelly's gag lies: Master Gracey is, literally, trying to be the Ghost Host, and the Ghost host just won't let him. 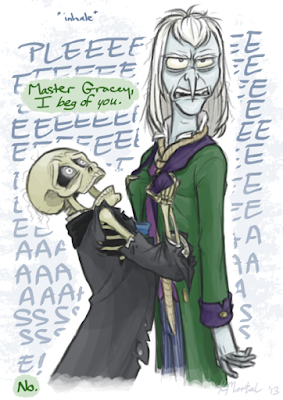 On a less serious note, that little “inhale” bit before the long "PLEAEEEEEEEEAAAAAAAASE" adds a great deal of hilarious nonsensicality to the piece — additionally, you've got to wonder how Master Gracey, a skeleton, can inhale anything.

Also, the Ghost Host's stern expression, which is reminding of "The Best pal he'll ever have", is hilarious, as usual. Kelly seems to have slightly changed her rendering of him, too; his chin is much less pointy than in, say, "Rude".

So yes, it's a good strip ! Bravo again.