REVIEW: "It's that time of the year again…" 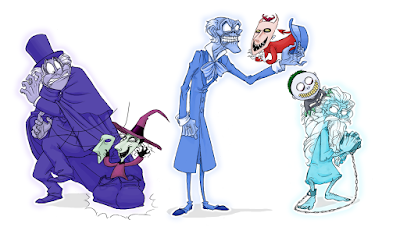 Ho Ho Ho ! Merry Christmas ! To get your present (an enlargement
of this picture to allow you to see all its details), all you've got to do
is click on it !


Like "Brides of the Mansion", this is more an illustration than it is a strip, but I suppose it can still be considered part of the series. It is an allusion to the Haunted Mansion Holidays, a seasonal overlay of the Haunted Mansion where various props and characters from the famous movie “Tim Burton's The Nightmare Before Christmas” are added (under the backstory that the citizens of Halloween Town, while spreading their Halloween/Christmas hybrid, discovered the Haunted Mansion, and were surprised to see that the ghosts liked their version of the holiday, settling to come back each year after that for Christmas).

This overlay is disliked by many a Haunted Mansion fan for its disrespect of the regular attraction, or because the fans flat out dislike Tim Burton's The Nightmare Before Christmas. (I am one of those). The idea is thus that the fans are not the only ones to be bothered by the Halloween characters's arrival: so would the ghosts be. As often, the concept is very good.

When it comes to the execution, it is equally admirable, from the expressions and poses of all three Hitchhiking Ghosts to the colorization (you know, the one I promised you last time). An obvious effort was put in it here; the faint glow around the character, the shading on their clothes, or the fact that she decided to give each Hitchhiking ghost a personal color  are evidence of that.

A very nice Christmas present indeed, with a fun concept and a flawless execution.
Posted by Achille Talon at 05:21