The Life and Times of Scrooge McDuck: "The Wreck-hunter of the Carribeans"

Does this title sound familiar to you ? If it does… forget about it, you're mistaken, for this is a story that doesn't exist, even though it should and was supposed to.

More exactly, it was apparently planned to be the 11B chapter of Don Rosa's The Life and Times of Scrooge McDuck. I don't know if there were serious plans, but Don Rosa clearly had something in mind. The plot would center around Scrooge looking for treasure maps and sunken treasures in the Caribbean. The idea comes from Barks's Only a poor old man…, where Scrooge briefly remembers this period and we get a panel of flashback of it.

Don Rosa, when collecting Barksian facts, based some of his chapters on those one-panel flashbacks in Only a poor old man: his King of the Klondike is as much based on the single panel of Only a poor old man than on the flashback Back to the Klondike, which would only become a more prominent influence on the later Hearts of the Yukon and Prisoner of White Agony Creek, the whole Copper Hill chapter is based on another panel, and a dialogue about Mongolia gave him the impulse to do the 2-3 pages sequence in chapter 11 where Scrooge discovers for the first time his ability to swim in money. The "searching for wrecks" business got mentioned, sure… but in a single panel of the 11th chapter: 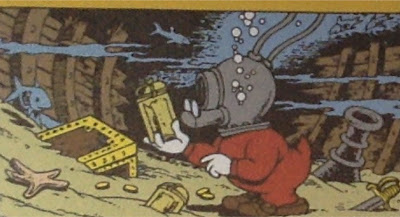 And not even an original one at that; he's basically just copying Barks's own flashback panel, so we hardly learn anything about his adventures back then, aside from the fact that this period lasted one whole year (which we learn from the narration box that I cut here because since this is scanned from a French reprint it was in French and you'd have gotten confused for no reason when it's totally besides the point). But then, it's just one of the many events he had to include in the 11th chapter; it's only one of the many potentially chapter-length flashbacks that only managed to get a quick mention. So why am I especially concerned about that one ? 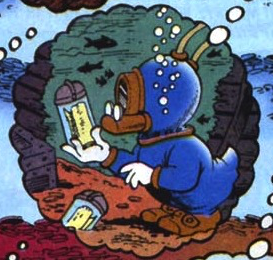 Again ! All the other think bubbles are callbacks to the most glorious moments of each chapter, and Don Rosa just stuck than one around. Sure, you could say it's meant to represent Chapter 11, but it's not especially notable or representative of its plot. The "searching for wrecks" seems to have been its own independent thing the whole time, and Rosa just didn't get the opportunity to write that particular story even though he was wanting to. Why ? Probably a lack of inspiration, because… 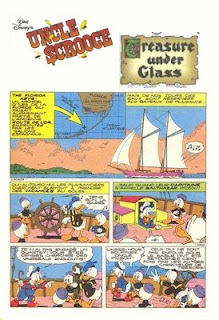 …he'd already written a shipwreck-hunting story, and when combined with The Horseradish Story, it probably made Rosa think that there was nothing new to be written about Scrooge hunting sunken treasure without seeming redundant.