I gather that on Duck Comics Revue dwell some Li'l Bad Wolf fans, and GeoX, not finding the character all that interesting, never gave them such a treat as a Li'l Bad Wolf review. A quick stroll around the internet tells me that, actually, nobody ever did one, unless it was deleted. It was about time I filled this blank ! 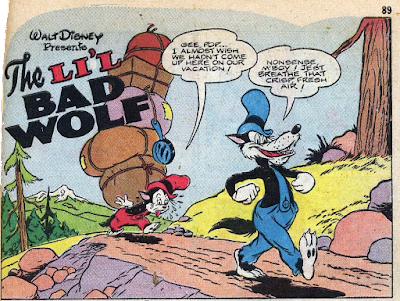 
The title is probably not familiar to you, and that's normal, because it was actually not titled when it was first published; it's only one of those "reprints" titles. And you have little chance of remembering the story, because it was published in the same book as Barks's iconic Vacation Time, and as good as Camping Out may be, all odds have it that the story the occasional reader of the book will go remembering will be Barks's. AND THAT'S A SHAME ! For Camping Out is far from being your average Li'l Bad Wolf story.


As for the story itself so far, I'd just like to point out how ridiculously and willingly stupid the concept of the Big Bad Wolf going camping in the wild is. He already lives in a cabin in the middle of the forest, doesn't he ? And he spends his time hunting wild critters, right ? What more does he expect ? 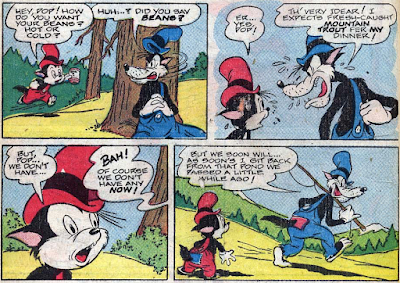 Notice again two things: #1 he's not even considering chasing the Little Pigs this time around, and #2 Li'l Bad Wolf doesn't object to his pop going fishing — of course he doesn't: for some reason, pigs are sentient but trouts aren't. Anyway, at the pond, Zeke encounters… this: 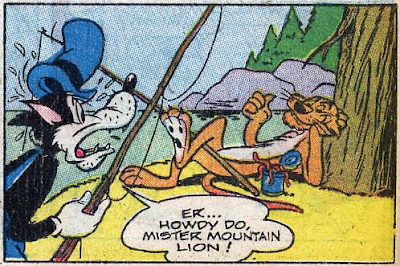 For those who didn't recognize him, that's the unique and delightful Louie the Lion, from a number of  early fifties Donald Duck and Goofy cartoons. I love Louie the Lion, but his career was cut short when Disney stopped producing theatrical shorts.  Most of his appeal, however, was in the way he was animated; he's not the type of character that translated well in comics, I said to myself, so it's easy to see why he didn't survive there…

Except this story just proves he almost did, and very well at that, Turner drawing him rather excellently. 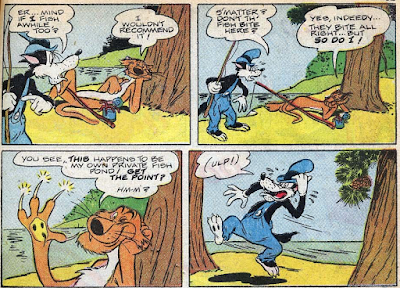 I just love his blasé, almost diva-esque way of chasing Zeke away. Reminds you a little bit of Shere Khan in his memorable chat with Kaa in Disney's Jungle Book, I'd say, though it is most probably coincidental.

Do note that Louie's anthropomorphism is upgraded here compared to the cartoons, where he seldom talks, and when he does, he "talks lion" (we see him moving his lips, but what we hear is deep, unintelligible grumbling). And he walks on all four, hardly being the kind of character you'd expect to use a fishing cane. Yet it works very well here, and it still feels like the same old Louie the Lion !

I'm going to retire in a small corner and sob over the arbitrary choices of fate, because this is sadly Louie the Lion's only comic appearance ever. And I do mean ever: he did not even appear on a cover or something, or even on a photogram of his cartoons that would have been published in a book, or anything really. NO. Four panels, and that's all ! Booh ! Sob ! Sigh !…

Don't let that bottom left panel fool you, as I told you, the Pigs are not in this story, it's just a continuity nod. Effective silhouette work on the right panel.  I give you a fair guess as to who that might be. (Answer "A random coyote" is not accepted). However, why on Earth did the colorist paint the sky light blue ? It's about midnight, and that big yellow stuff, you know, it's the Moon. And if that wasn't enough, the sky is black in the previous panel, indicating that Unknown Writer's and Gil Turner's intentions were always that the sky would be dark blue or dark purple. Bah.

Here's a gag I find hilarious in spite of it possibly being unintentional:  Zeke is a wolf, right ? Like, a wolf that howls to the moon ? Like a coyote ? I suppose ? 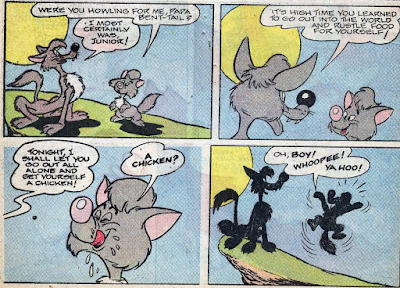 Yet another couple of fifties cartoon characters. This time, those are Bent-Tail and his son Bent-Tail Junior, frequent rivals of Pluto at the time. This is also their only appearance in comics, but somehow I fell less revolted by that than for Louie, mostly because Bent-Tail and son still had a long career in cartoons, unlike Louie, even managing to get their own TV special, The Coyote's Lament, in 1958.  For that matter, the TV special was the first time they talked… well, outside of this comic, that is; because just like Louie the Lion, they are normally mute.

Still, there's distinct Furry Confusion at work here: Louie is apparently almost as anthropomorphic as Zeke, holding conversations with him, using tools, fishing, but he doesn't wear any clothes; Zeke treats him as a person. Bent-Tail and Bent-Tail Junior, however, walk on all four and Li'l Bad Wolf speaks of them as animals. Weird. 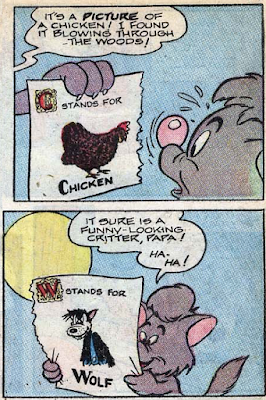 More Furry Confusion: the chicken is much more realistic than most chicken in Disney Comics (even  more than those that are not supposed to be anthropomorphic), but the wolf is a portrait of fully-anthro Zeke Wolf. Bent-Tail Junior is, however, very cute. 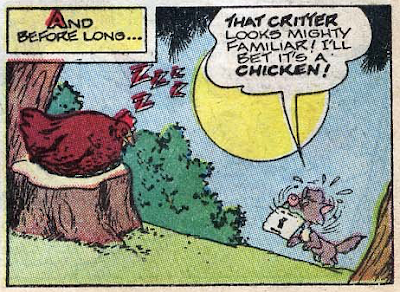 And sure enough, when Bent-Tail Junior comes across a chicken, it is a realistic one looking like the picture. But how and why is that chicken in the middle of the woods, for some reason sleeping on a tree log ? Aren't chickens supposed to live in farms ? And assuming this is a wild chicken, it ought to have built a nest instead of sleeping on a tree log ? I suppose ? 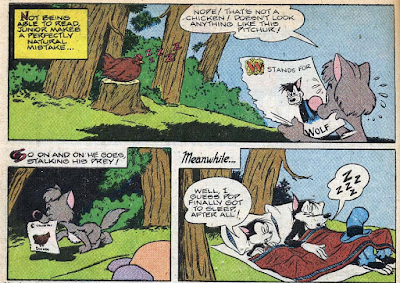 Predictably enough, this happens. One is reminded of the Looney Tunes's Henry Hawk here, in a good way. The art on the Bent-Tail panels here is surprisingly good, compared to sometimes shaky renderings of Zeke Wolf I did not reproduce here. 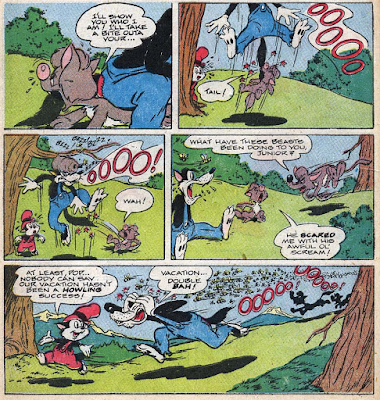 Funny but forgettable mishaps happen, and there it ends, Camping Out: really decent art, a good plot,  excellent characters we'll never be seeing again (booh) and a few interesting occasions to reflect on the different levels of anthropomorphism in Disney comics; I think it's more than one can tell from a lot of those fifties stories.