REVIEW: "Wonders of the Deep"

So, I told you that I would also be reviewing non-comics Disney here, which pretty much amounts to:  cartoons. Thus, here is one. 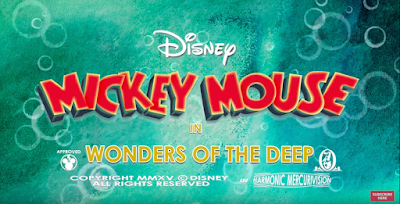 Here is 2015's Wonder of the Deep. For those who don't know, this short is part of a new wave of CG Mickey Mouse cartoons that premiered last year. More or less following the Epic Mickey craze, these shorts have redesigned all the characters in a "pseudo-retro" way that echoes the design of the 20's but is still unmistakably modern. The episodes, if you ask me, are of varying quality; there are some good gags and visual ideas, often very good voice acting, and sometimes nice background, but there are some other gags that are really gross and I'm not really keen with the redesign of most of the characters. You can watch Wonders of the Deep here where Disney posted it for you to (allegedly) enjoy. 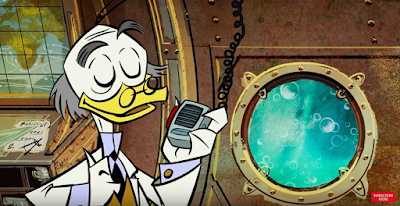 "Hello there ! Welcome aboard the Ducktilus ! Join me as we dive twenty thousand
leagues under the sea !"

The short pleasantly starts in Ludwig von Drake's new submarine. It is a really good surprise to meet Ludwig here, and despite the limited animation he's still one of the most pleasant characters to look at, and moves in his characteristic manner. He can't, of course, be voiced by the late Paul Frees, but Corey Burton, who took over since Frees's passing, has if you ask me improved since House of Mouse (at the time, he gave Ludwig a slightly too high-pitched voice compared to Frees). Ducktilus is an easy pun, but not an insufferable one.

P.S.: I think this is a good place to mention that I am a big Ludwig von Drake fan. 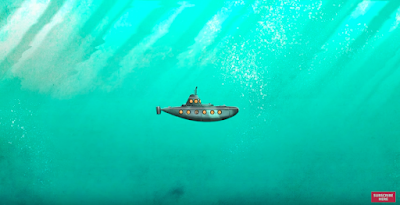 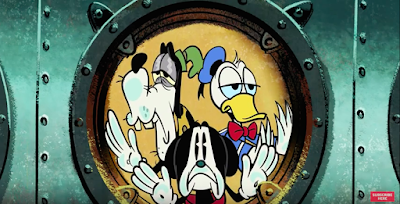 He hires, of course, Mickey, Donald and Goofy as his crew. The utter emptiness of the ocean (though it is a nicely-shaded one, I'd like to point out) does not strike them as being particularly thrilling, which leads them to make the depressed mimicries seen on the second picture here. It's my main problem with this series's art style: the character models are not especially ugly, but they keep stretching them in disgraces ways. Yuk. 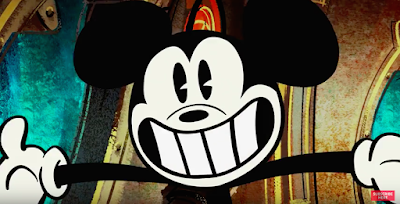 "Professor ! I thought we were going to explore 'the Woooonders of the Deep' !"

So, Mickey "sarcastically" reminds the professor that he's not here to stare at the water, and… see what I meant earlier about the eerie mimicries ? And it's far from being the most egregious example. Happily, we get this funny part from Ludwig von Drake, brought down only by another Mickey Weird Face: 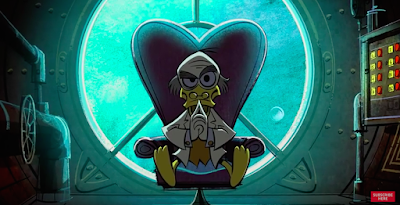 (ominous music playing in the background)
"Oooh… so you really want to see wonders ?" 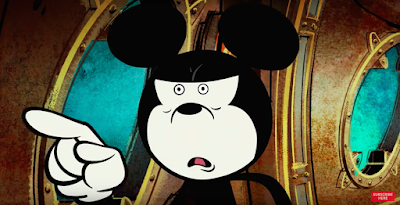 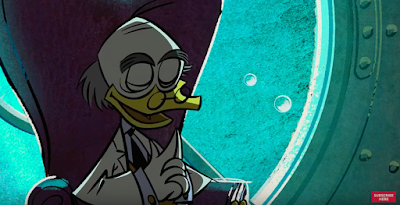 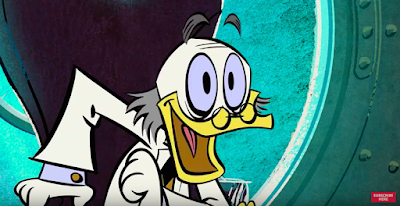 If it was not for Mickey's weird face, this sequence would be flawless. Burton's acting as Ludwig makes it all the better. Anyway, dive they do, and they begin to come across interesting fishes, such as a "dogfish". (Are there such things, or is it just a play on catfish ?) 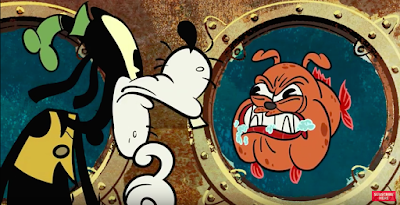 Like in Camping Out, there is a distinct play on Furry Confusion here, and I do appreciate it, but good lord, those designs. That dogfish is the stuff of nightmare. 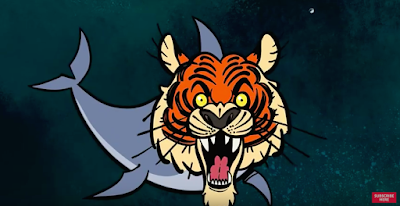 The above is, you guessed it, a "tiger shark". Once more, it's a little easy a wordplay, but it's still worth a chuckle. 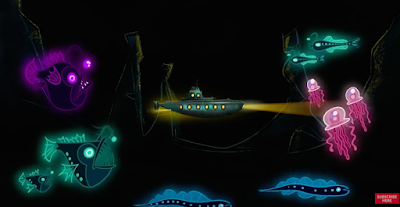 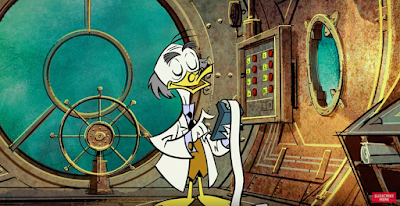 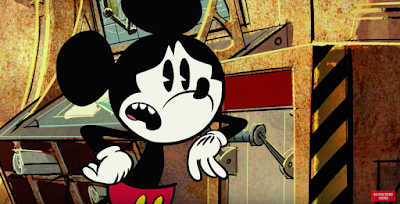 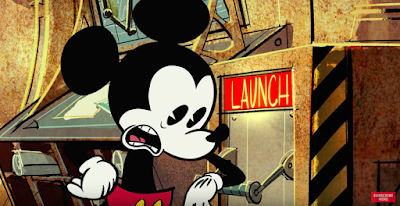 Uh, oh… What do you think that switch commands ? 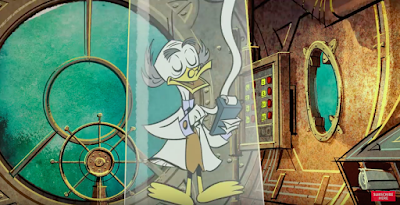 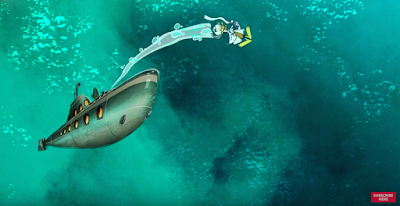 
Well, C.C.C. (Contrived Cartoon CoincidenceTM) causes Ludwig to be standing at that point on the exact spot from which he can be blasted out of the Ducktilus. A tidbit predictable, if I might say. However, the running gag that he keeps computing without even noticing is pretty hilarious. Also, note that the three yell "THE PROFESSOR !". Shouldn't Donald be yelling "UNCLE !" ? 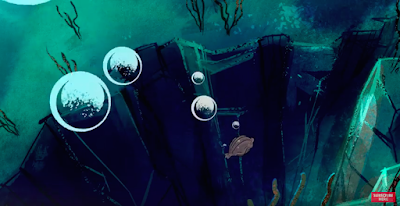 Ludwig then proceeds to get swallowed by this swimming clam that just happened to… wait a minute, swimming clam ? This is ridiculous ! A clam doesn't swim, a clam remains nicely at the bottom of the ocean. For that matter, a clam doesn't swallow anthropomorphic ducks, either, but that's besides the point. The point is, contrary to the cartoonish "tiger shark" and others, I'm not sure this particular mistake was intentional from the writers. Anyway, the clam proceeds to jump in a dark pit, and later to get eaten by a kraken. 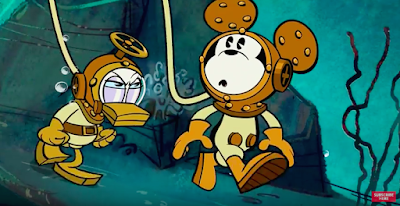 So, Donald and Mickey go inside said pit to get the clam (and the professor) back, and I'll grant you that those custom-made diving suits for Donald and Mickey, adapted to their beak and ears, are pretty funny. In the pit, they find these charming mermaids: 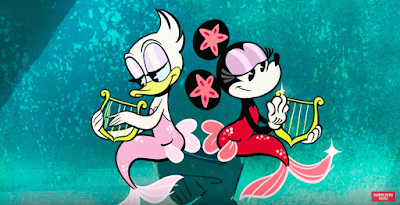 It's love at first sight, and off they go to dance with their new fiancées, with a random and obnoxious pop song playing in the background. But what's this ? Goofy exposes to the audience that "air deprivation can cause hallucinations", and we see that the tube that gives the two heroes air was blocked. Turns out, obviously, that those mermaids never existed in the first place. But do I need to tell you why this is a ridiculous concept ? Well, you know, before you lack so much air that you get hallucinations, you notice that you are beginning to have a hard time breathing. Which Mickey and Donald did not. Meh. Anyway, what do you think is there instead of the mermaids, then ? 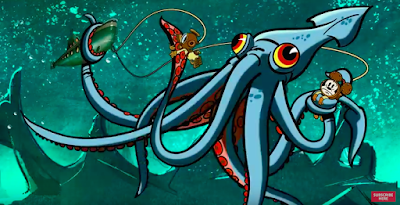 A kraken, of course. And a blue one. (I mean, in real life, those things are pink, right ?) He is pretty ugly too, though it's a little more forgivable because he is supposed to be a horrible monster. 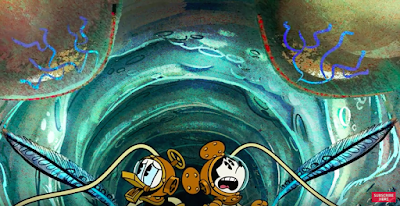 Long story short, he swallows them, Pinocchio-style, and we get this rather disgusting shot of the inside of the Kraken's belly. Whenever this series shows viscera from the inside (which, for some reason, it does surprisingly often), it's always as these blueish, purplish, palpitating… things. Yuk yuk yuk.

Of course, they escape, having on their way discovered that the professor's clam (from the inside of which he is still heard "zerozerozero-ing") had been swallowed by the beastie. They also find the time to stick in a Pinocchio cameo: 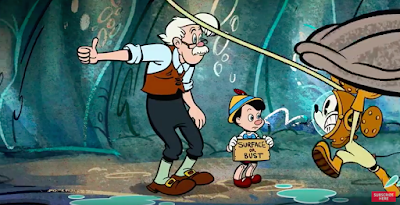 PINOCCHIO: "Why does this keep happening to us ?

Then, back at the submarine, Ludwig von Drake is freed at last (By the way, how was he breathing the whole time ? Did he get hallucinations, too ?): 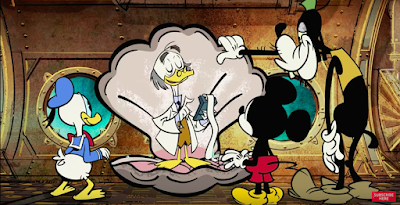 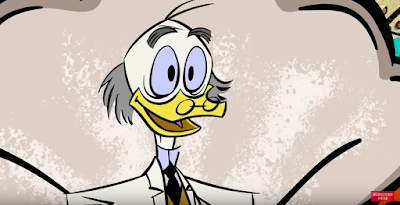 And then, there you have it. If you want my overall opinion (of course you do, that's what you're reading this review for) about this episode, whenever Ludwig von Drake shows up they make a good, worthy use of the character, but their treatments of Mickey, Goofy are a bit shaky and they are really bad at designing pleasant-to-look-at cartoon characters.