Haunted Mansion comics may be nice, but it was time I got back to more traditional Disney comics. Now, I had read Voodoo Hoodoo a couple of times in the past, but in French translations (since, as you may have grasped in the comments of the ‘Sorcerer’s Apprentice’ post, I’m French). For the purpose of doing this review, I got around reading it in its original American printing, and a bunch of things suddenly struck me about it. 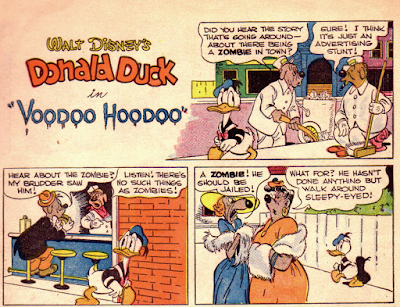 So there’s this rumor of a zombie hanging around in Duckburg. Donald hears said rumors and goes ask an… expert on ghost stuff who… I dunno… see for yourself.

These two panels are, to me, the most puzzling thing in the whole comic. For various reasons. 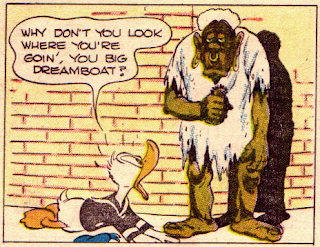 What was bound to happen happens: Donald meets the Zombie, whom apparently the editors in charge of the reprinting also thought was racistly depicted, and they had Barks re-draw his face without the big nose. (Same goes for Foola Zoola later). I’m not sure about this: on one hand, I don’t think it’s particularly offensive in Bombie’s case. A big nose is a cartoon/comic standard (just look at Asterix, for instance). If you look up any Donald story featuring “real” humans (aside from Dangerous Disguise and Ancient Persia, which are really special cases), there’s a good chance they’ll have noses at least as big as Bombie’s. On the other hand, I actually think Bombie and Foola Zoola look better with a smaller, more realistic nose; it makes them look like more “serious” characters. Bombie's misadventures you take more seriously than those of, say, Witch Hazel. And Foola Zoola, with his small, triangular nose, is much more threatening. He also looks more his age with those wrinkled lips. And those pointy teeth look so unspeakably silly. Here is a comparison: 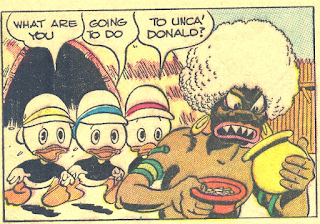 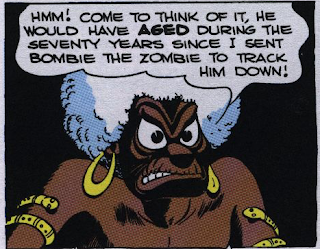 This is eerily chilling.
…

So, you probably know how this goes. The zombie gives Donald a voodoo doll that stings him, and, persuaded that he's under some kind of curse, Donald goes to his Uncle Scrooge's.

So, here are my thoughts about this little part of the story that has turned, in the fans' eyes, into its biggest problem. At the time, Scrooge wasn't established as a “good guy”, and thus apparently, the curse was put on him when he tried to throw a voodoo tribe out of their property to turn it into a rubber plantation. To “justify” it, Don Rosa, in his Life and Times of Scrooge McDuck, based a whole story arc on how this was Scrooge's only dishonest deed ever, how he always regretted it and how Bombie the Zombie and his curse are metaphorically an allegory of his remorse. The arc Rosa did is, on its own, wonderful, but… bah. He is missing the point.

You see, this rationalization is all based on the fact that what Scrooge did is evil. And the thing is, Barks's story really doesn't support this interpretation. First, there is the fact that Foola Zoola is this evil witch-doctor who is basically the villain of the story, and for that matter wouldn't look out of place in a line-up of Disney villains also including Jafar, Cruella De Vil, Maleficent and the likes. And then, there's the fact that everyone else in Africa seems to fear and hate this tribe, too; and there are also those rumors that Foola Zoola leads raids and plunders to nearby villages that the Ducks hear at the airport. Had Scrooge succeeded in getting rid of Foola and his men, he would have been seen as a savior by literally everybody else on the planet.

Why this is uncomfortable is because it implies that the Voodoo Tribe is unredeemably evil, and that Scrooge's “Those savages were made” line and its next-of-kins are right. And they sound so despicably racist to modern ears ! But what one must understand is that though it's racist from our point of view, in this universe of fiction, all those things are true. You just can't blame characters who appear to us as racist, when through some whim of a racist author, the universe they are in really works like that.

Do bear in mind that I'm not saying Barks was racist, or that this story was especially racist, but it just contains clichés that are racist — namely, the evil voodoo tribe and its evil leader. It's racist from our point of view… but in-story, it's not: the evil voodoo tribe is evil, and making us feel sorry for them is missing the point.

This is one of my favorite bits in the story. At the sight of that second panel, I am filled with an indescribable mix of laughter and empathy. Poor thing. You just want to hug old Bombie.

This whole quiz sequence is as hilarious today as it ever was, since those things certainly didn't improve since 1948. I find this ever-moving presenter pretty hilarious, contrasted with the unmoving Bombie. This is one sequence that would render beautifully in animation. 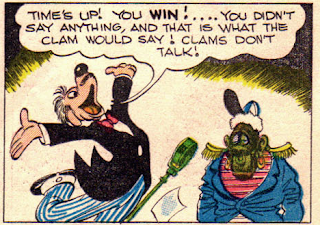 This is probably unintentional, but I find it worth noting that it is a talking dog making the statement that “clams don't talk” as though it was elementary.

The panel on the right, with its realistic scenery and shadowing, seems serious; complete with Donald's conqueror pose, if you forgot for a minute that it's a waterfowl you're looking at, this could seem to be from a genuine adventure story/movie. 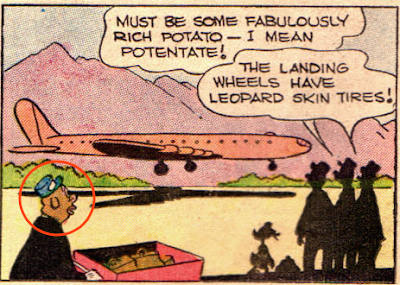 Isn't this guy strange ? He's got dog ears, but a human nose. He must be a hybrid, I guess. 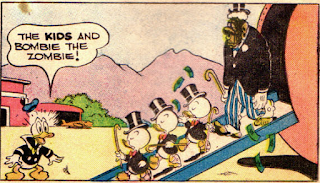 Isn't this surreal image pretty funny ? It is to me. Also, notice how Bombie seems to be wearing the quiz presenter's very suit. 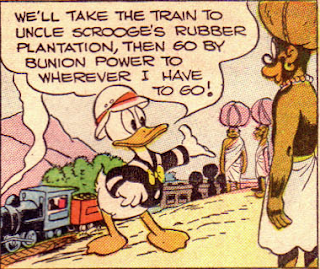 Carl Barks was generally a pretty good artist, but there is something weird with the proportions here. Either Donald suddenly grew a foot or two in height, or the native is a pygmy, which is unlikely.

There is the bit I was talking about earlier -- Foola Zoola and his tribes are definitely villains. 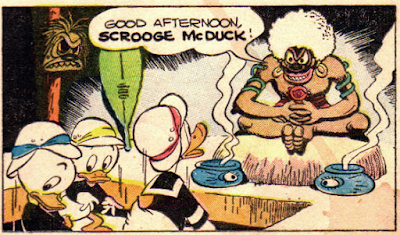 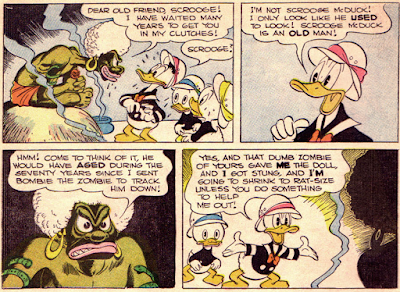 Here's another place where Rosa's version and Barks's just don't add up, not just in terms of symbolism and morality, but in terms of facts. For one, here it is obvious that Zoola and Scrooge were old rivals who knew each other for quite a while. In Rosa's versions, they see each other for, what, thirty minutes maximum. Zoola's “Dear old friend” isn't really logical then. And also, that weird idea of Rosa's that Scrooge looking like Donald was the result of a disguise. Well, it's funny in itself, but the way this dialogue here plays, this is not a possibility that was, actually, left open. In Don Rosa's version, Scrooge only disguises himself after introducing himself to Foola under his regular appearance -- Bombie is tricked by Scrooge's disguise, but not Zoola. Thus, it doesn't make a shred of sense that Zoola would, genuinely, confuse present-day Donald with the Scrooge he knows. No, the way Foola Zoola puts it here, it's very clear that in the days the two knew each other, Scrooge  genuinely did look like Donald. 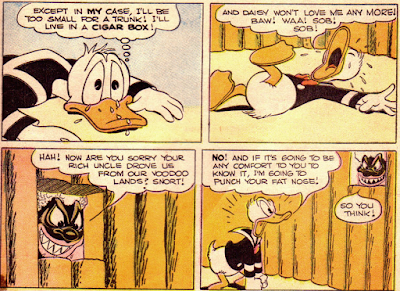 There's some good tension here, but the stake seems kind of ridiculous in comparison. I mean, you're gonna be shrunk to the size of a mouse. I can see why it would be unpleasant, but there's nothing to be too tragic (for Donald) or sadistic (for Foola) about. It's nothing too deadly or harmful, especially considering that in the Disney Comics world, anthropomorphic mice exist, which means there already are facilities arranged for 10-centimeters-tall people. 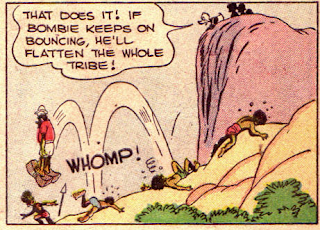 This denouement always fell flat for me. I mean, what are  the odds that Bombie somehow only bounces on people ?

Well, anyway, a good story with not a doubt, with mostly great art, a good story, a good character, and a lot of creativity. There is however some confusing stuff (Bop Bop, I won't forget you!), as well as some vaguely racist stereotypes, but nothing too drastic.